Every superhero struggles at first.

That was said by a young girl in this PSA for Decoding Dyslexia-MO. It has stuck with me ever since because it’s true.

Spiderman was an orphan raised by his aunt and uncle. He wasn’t popular in school and was a target for bullies. Once bitten by a spider, the struggle got REAL. His personal life suffered. Friends and family couldn’t understand what was going on.

Yet, there were strengths …

Superman was similar, so much so that he had to HIDE his gifts as the nerdy Clark Kent to even remotely try to fit in.

So how does this relate to dyslexia? A pre-school kid goes along thinking all is well in a typical childhood, then BAM! They are hit by a major struggle – reading and writing do NOT magically happen for them like it does for everyone else. They can become outcasts …and even be bullied. We’ve certainly had our fair share of tears, heartaches, and frustrations over the years.

So why in the world would anyone compare this to a superhero? 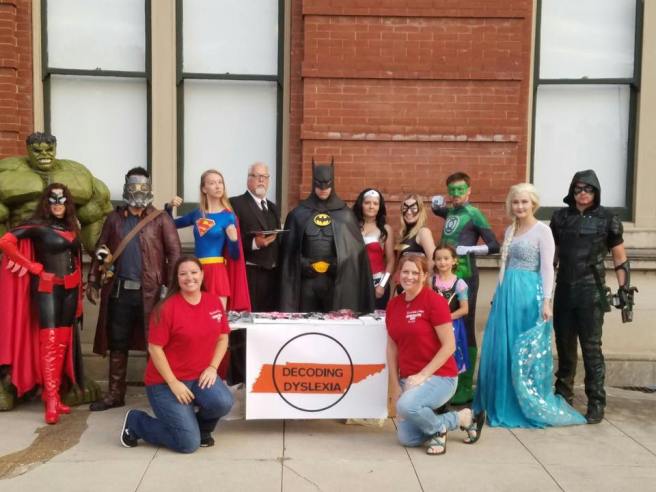 Because our kids need to know that it is possible to be successful in spite of struggles – just like superheroes. It’s not a death sentence on your life, your career, or your future. It’s a struggle. And you can work to overcome this challenge in your life.

And guess what? Just like superheroes – just like ALL of us – you DO, in fact, have gifts. All of our gifts are different, but we all have them.

In NCLD’s 2017 State of Learning Disabilities Report, they state that students AND adults with LD frequently mention a stigma that follows them: people assume they are lazy and stupid. That affects them as much as their struggles with reading!

How do we counteract this narrative?

By making sure the public, and our students, know that they are NOT lazy. That there are people out there who have these SAME struggles, but who made it.

People like Jovan Haye, former Tennessee Titan and Vanderbilt University graduate. My kids and I had the honor of meeting him a couple of years ago. Success wasn’t handed to him on a silver platter. Jovan was not born rich. His childhood could even be described as rather challenging.

But when we met him, Jovan said “when I was a child, it was very hard. But looking back, I believe dyslexia is my superpower. It taught me to never give up, and to look at challenges differently.”

Why did this giant of a man say this to a room full of dyslexic kids? Because he knew – he knew these kids already had some doubts about their futures. He knew they needed to hear from someone who did overcome – that it is possible. They already know dyslexia pretty much sucks, but he gave them something they didn’t have before – a dyslexic role model.

He gave them hope.

He also gave them something to cling to when the playground bully says “you can’t read? You must be stupid!” They can say out loud or even internally “I’m not stupid, and neither was Jovan Haye.”

In his book, Jovan says:

“Even now, I sometimes wonder how I did it. Looking back to my childhood in rural Jamaica, I see a barefoot little kid bouncing around like a wind-up toy, stuttering constantly, unable to read, and I have to think: Who would have guessed I would go so far?”

He goes on to say:

“I’m not a celebrity and I make no claim to scientific expertise. My story simply illustrates that an obstacle like dyslexia is not a game-stopper. Everyone faces challenges of one sort or another, and there is value in being tested, facing defeat, and having to start over. I believe that, regardless of the obstacles, if we tap into the power of a great dream and if we’re willing to keep trying and never give up, we can win.”

Did meeting Jovan make my kids suddenly think that because of their dyslexia they would be an NFL player? Haha – no! That didn’t even cross their minds! But it did tell them to keep trying and to keep dreaming.

They, too, are allowed to dream – even as children with dyslexia.

And that, to me, is everything.

If you would like to read more of Jovan’s story, Bigger than Me is available on Amazon. Have a print disability? It’s also available on Learning Ally. Julya Johnson is a parent, weather-geek, and hiker. She co-founded (and is the current President of) Decoding Dyslexia-TN in 2013, and has been published in IDA Perspectives, the Mighty, Grammarly and Learning Ally. View all posts by Julya Johnson